I don’t play golf. I’ve attempted it a few times over the years, and realised that it’s a sport that requires a lot of time and practice to develop a good technique. That’s time that I spend working and with my young family. However, I see many patients for whom golf is an important activity in their lives. As an ophthalmologist, I am always thinking about the importance of vision in daily activities. Hence, I was fascinated when a golf pro told me a couple of years ago that he could teach blind people to play golf. I didn’t realise it would be possible, because so much of the sport is visual. He assured me that blind people can indeed be taught to play golf well, but they need assistance in lining up the shot and having an explanation of the layout of the hole. I thought that this was intriguing, because I often hear from golfers about their frustrations about not being able to see the ball clearly.

Cataract refers to opacity or clouding of the natural lens of the eye which causes blocking and scattering of light, and therefore reduced vision. Typical age-related cataract is referred to as nuclear sclerosis, which develops slowly as a gradual yellowing of the central lens, and can often be seen on examination of the lens in people above the age of sixty, sometimes earlier (see Figure). This yellowing of the lens causes a gradual shift in colour and brightness perception and a reduction in contrast sensitivity (ability to make out detail in low light situations). The problem is that our measurements of vision are often done with a high-contrast visual acuity test (Snellen chart) which is dark black on bright white. High contrast testing is the same type of testing done for a driver’s licence. Visual acuity with high contrast is relatively well preserved in age-related (nuclear sclerotic) cataracts, and hence can over-estimate how well someone is actually seeing in typical daily activities. I am often explaining to patients that high contrast testing does not emulate real-world conditions. Even patients with quite dense cataracts may still meet the driving standard, which involves a high contrast test, but they may have relatively poor vision in low light situations.

Because vision gradually deteriorates with age-related cataracts, it can be difficult for people to recognise. Most people generally know whether their vision is good or bad by comparing one eye to the other, or by comparing their vision to a friend’s vision. Often the visual deterioration from age-related cataracts happens to both eyes fairly equally, so the changes can be harder to recognise. Golfers often recognise that they lose sight of the golf ball in flight, especially on a cloudy or overcast day. They may also find it difficult to see the ball when it has landed. They will often notice that their friends who have already had cataract surgery can still see the ball in those situations, so they ask for assistance. Patients tell me that not being able to see the ball in flight or when it has landed is a source of frustration. The golf pro tells me that it is the frustration that can lead to reduced performance. 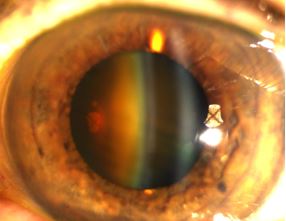 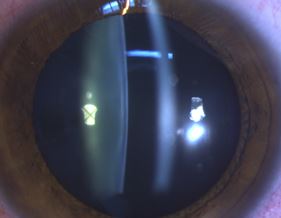 After cataract surgery, patients will often talk about how much better they see the ball. They also often notice that their improved vision helps with other aspects of their lives, which may be more important, like their reaction time when driving. For example, it is easier to see events ahead occurring earlier, and start braking earlier. People are often surprised at how much their vision had deteriorated when they become aware of these visual improvements after surgery. The deterioration in vision had crept up on them slowly.

Does cataract surgery improve your golf score? This is one area where it is wise not to make any promises of improved scores, but seeing better often leads to better enjoyment and less frustration.

For more information on cataracts and cataract surgery, follow this link:
http://www.eyeandlaser.com.au/conditions/cataract/